During times of upheaval, the students do. The programmed mob. Raging Id. An unleashed beast.

Dictators from Hitler to Castro to Pol Pot have known that students are the shock troops of totalitarianism.

Professors, those institutional markers of mediocrity, either stand aside, or rush to get in front of the parade. Administrators are as squeamish.

During times of protest, students feel their raging youth, their numbers and their idealism.

Attend one of those “Nutcracker” ballet matinees during the holidays and watch what happens when the children in attendance outnumber the adults– and they realize it. They take over the hall– shouting; screaming; running up and down the aisles.

We knew something was up in colleges when we had a table at the Allied Media Conference in Detroit two summers ago. I had sat at a table with a small press guy at the AMC in 2008. Back then it was a standard DIY zine-style event. Activists were there, sure. (Including myself.) But everyone was happy. The atmosphere, whatever your cause– if you had one– was harmonious. By 2015 the vibe had changed. No harmony. Instead: fragmentation. Each table with their own particular identity politics, from race to gender to abundant bodies– and everyone was angry.

Trump’s election didn’t create the anger. It set it off.

We sensed the irrational force hovering over the proceedings. Without question the self-righteous force is more dominant on college campuses now than in 2015. News events show this.

Mob power by its nature is intolerant. The question of “free speech” in the fight against injustice, to the youthful crowd on the side of right, is beyond irrelevant. Distasteful speech becomes an object of hate which must be steamrolled; cleansed away. Most people aren’t aware that Nazism itself was a youth movement which took over universities. Mob rule is always irrational, always fascistic, always totalitarian, no matter the flag of the moment it flies under. 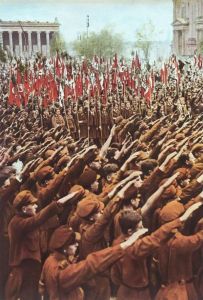 But who creates the mob–?