THE ROAD NOT TAKEN

AN ARGUMENT FOR VIGOROUS LITERATURE

Populism or elitism? This was the choice American literature faced at the beginning of the 20th century.  Whether to remain on a path of robust fiction and poetry, immersed in the land and nature as embodied in the person and work of Jack London– OR switch paths toward the inward-dwelling, Eurocentric, strictly domesticated digressions of Henry James, for whom the natural world was a frightening and deadly place, full of ghosts (“Turn of the Screw”) and disease (“Daisy Miller”).

The lives of the two authors could not have been more different.

JACK LONDON never met his supposed father. He went to work at age thirteen, educated himself at libraries, studied in saloons, spent time in a penitentiary for vagrancy, hired on as a sailor, and joined the Klondike gold rush in 1897. He didn’t find much gold there but instead, many terrific stories, including his most famous, “The Call of the Wild” about a dog named Buck. To this day probably the best animal story ever written.

HENRY JAMES was the son of an independently wealthy philosopher and the grandson  of a banker. He traveled as much as Jack London did– but to Europe, and on a more comfortable scale. He attended Harvard, became friends with famous authors and future Supreme Court Justices, and in time, himself became a famous writer.

DESPITE the international popularity of populist novelist London, and the success of others of his kind like Rex Beach and Frank Norris, it was an unequal contest, as the critical establishment was based in New York City then, as now, their gaze toward the east, toward England and Europe, seeking approval there and not in the American people themselves. 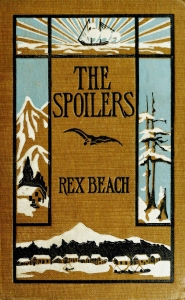 Clear-minded-and-active prose of the kind Jack London wrote was devalued– in part because of its universality, its popularity with every kind of reader. Teddy Roosevelt-inspired editors like Owen Wister, advocates of the physically-strenuous life, were few and vanishing. What became valued instead was literary difficulty. Convoluted sentences reflecting solipsistic obsession with febrile thoughts inside a character’s or narrator’s head.

Pushbacks against this by Hemingway, Kerouac, and others– by authors who deliberately pushed themselves into the actual world– have been rearguard actions.

In his groundbreaking 1977 book about electronic media, Four Arguments for the Elimination of Television, Jerry Mander discussed the sensory deprivation of civilization and the modern world, arguing that mankind’s retreat from nature was pushing individuals further into the recesses of their own minds.

When we reduce an aspect of environment from varied and multidimensional to fixed, we also change the human being who lives within it. . . . Researchers have found that when sensory stimuli are suppressed this way, the subject first lives a mental life because mental images are the only stimulation.

In his book, Mander talks about a person’s aura. What techno-nerd writers– those who spend the bulk of their time interacting with electronic media instead of the actual world (via TV, video games, smartphones)– don’t get is the analysis of individuals and the world which takes place when you’re tuned in to the small cues and signals the human animal gives, necessary for assessing and understanding that person, which you’ll never receive off an electronic screen. On the street you quickly learn to size people up in an instant– their eyes revealing aggression or fear, duplicity or defeat, strength or weakness. But you read as well the overall vibe– the “aura”– of a person.
****

Henry James was the first solipsistic writer (at least since the ancient Gnostics)– pre-TV, obviously– removing himself from the stimuli of the reality of nature to that of the drawing room; of polite society– and into an obsessive focus on his own thoughts.

I should add that ART is about sensory experience. As writers we need to plunge the reader into that world of sensation. Doing so can only increase literature’s connection to the mass of people, and strengthen its cultural relevance.
****

Today, as for the past fifty or sixty years, writing programs as well as literary editors and critics value most refinement, of sensibility and prose.