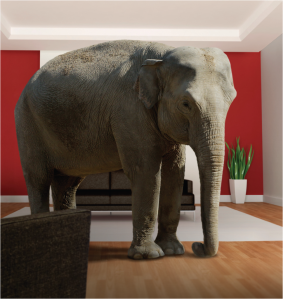 The elephant in the room that NO ONE will talk about is the thorough politicization of the National Book Awards. Here are the Finalists and other nominees:

The choices might be most slanted in the NonFiction category– as if the judges looked for every book which would conform to a narrative of America as an evil place which should never have been founded. Exaggeration?

Erica Armstrong Dunbar‘s target is George and Martha Washington– engaged in the “relentless pursuit” of a runaway slave.

Frances Fitzgerald‘s target is evangelicals, “right-wing zealots” in the words of an approving review of the book in New York Review of Books.

David Grann‘s target is white oil barons in Oklahoma in the 1920’s out to wipe out an Indian tribe.

Nancy MacLean targets the “History of the Radical Right’s Stealth Plan for America.” (Subtitle saying all you need to know about that one.)

Then there’s Masha Gessen, the most anti-Putin, pro-Cold War-with-Russia proponent around, which says a lot. Gessen has the energy of an evangelist, and as fervent a cause. While the other writers give, more or less, honest reportage, albeit from a slanted premise or viewpoint, Ms. Gessen is a professional attack dog. A propagandist. Doubt it– or her political slant? Gessen’s recent articles on the U.S. President include “The Real Madman,” and “Diagnosing Donald Trump, and His Voters”– both of which posit the man as insane. Playing to her audience, sure, and inflaming them– which is what a propagandist does.

Every year hundreds of non-fiction books are published– many thousands if the DIY variety are included. The slant, the bias, the distortion in the National Book Awards comes via which books are selected. Which images chosen to create the desired portrait– which for this nation is not an edifying one. (We are still a nation, though some would think not.)

Could more balance have been provided by the other five nominees? No. If anything, they’re more slanted, more a one-way view of culture and politics– the capper being Naomi Klein’s book on “Resisting Trump’s Shock Politics.” Ms. Klein is an even more hysterical propagandist than Ms. Gessen. (I base that on having read a few of her books.)

Objective commentators? Or advocates with a cause?
*******
The bias exists throughout the other categories, though in not as blatant a fashion. Again, it’s as if the books were selected to fill in a predetermined picture of America, past and now. Need a novel on the struggle of undocumented aliens in this country? We have one– Lisa Ko’s The Leavings. And so on.

If the impression is given that the selections were made for political reasons, for advocacy, and not for quality, this hurts most the writers themselves.