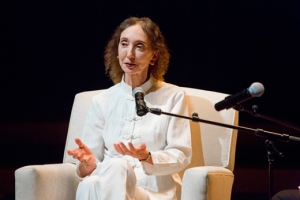 ANYONE watching Youtube videos the past several days has been hit with utterly pretentious ads for something called “Master Class.” Among them is one by Joyce Carol Oates which might be the apex of the type, for a variety of reasons.

“Joyce Carol Oates Teaches the Art of the Short Story.”

Yes, budding writers. You’re original, you’re unique. You’re YOU. Now follow these rules so you can craft the acceptable literary story which looks and sounds like what everyone else is doing. . . .

RULE OF THE EXPERT

RECENTLY I read a fascinating old book on tutoring by Samuel L. Blumenfeld. (A contrarian kind of expert, who in his day bucked the educational establishment.) In the book, Blumenfeld explains that the alphabet and 0 to 9 numbering system were primitive coding tools: “–the great intellectual leap forward” providing narrow roads for humans out of their fog of ignorance. Primitive ways for understanding the complexities of the universe– a universe which today’s physicists are discovering is 1,000 times more complicated and unknowable than Newton dreamed of. They’re usable tools– simple versions of other tools which might someday be available.

Or: In the greater scheme of things none of us knows as much as we like to tell ourselves about how this world operates. Or of what could be known.

From the first day of school we’re brainwashed to believe in experts– made to adopt the illusion that we humans fully understand this world. That all answers are possible and available. Yet by using our own limited animal brains– along with simplistic coding tools like language or computers– we’re incapable of fully comprehending the cosmos.  (Ancients flipped the script– believing the only fully true knowledge was revealed knowledge: the mind of the universe intentionally communicating to us.)

This society remains sold on the idea of experts. Not on those grasping with humility for knowledge, no, but instead, those assumed to already have it. Nowhere is this more evident than in the writing game.

THERE ARE hundreds more possibilities of how to write a short story than, say, of how to play the high-level chess game. Yet students in writing programs are taught there’s only one way: the accepted, well-crafted literary story.

“ONE OF THE TOWERING CAREERS IN AMERICAN LETTERS”

In her ad for the class, Oates fully adopts the role of Expert. Font of all literary wisdom. The appeal to the fledgling writer is not the presumed outcome– the creation of art– but instead, the self. Feeding the writer’s ego.

“If one can face the darkest elements in oneself, and things that are secret, you have such a feeling of power.”

(Among other things, this is pure gnosticism.)

“You’re going to explore your own imagination deep within you.”

Er, what about experience and observation?

“Language is the point.”

This is the philosophy of the literary writer. The words are more important than the tale.

Oates stands against the idea of a story moving too fast– she knocks the notion of reading a story in five minutes or less. (Note her smirk on the video at the very idea of it.) Never mind that pop music exploded in popularity when it offered songs with an average length of two minutes. They were dynamic, sharp, fun, and left the listener wanting more.

The Joyce Carol Oates technique is to offer the reader too much, drowning the narrative in insignificant details to slow down its pace. Anything to keep it from moving too fast. That would be wrong– at least by her moldy standards, which haven’t changed in sixty years. A time during which the short story has plummeted in size of audience, public interest, and cultural importance.

In the actual class Oates apparently talks about how interruptions are “the #1 thing that ruins creativity.” Well of course they are– if the technique is to draw the story solely from the imagination. This is the stale literary idea which posits The Writer as pristine individual existing in a bubble apart from the rowdy mass. Interruptions? People? LIFE?! NO! the precious Oates-style writer screams. Not when I’m in the middle of my imaginings!!

A DIFFERENT kind of writer welcomes interruptions, noise, life– Shakespeare at a tavern downing pints– because that writer knows experience is a writer’s material. Plot ideas and thematic points will still be in the brain in the morning. Along with much more– the insight and depth which come with being part of the social world.

The Master Class is aimed at upper-middle class aspirants who wish to become writers but unsure how to go about it. This is obvious in the two bougie students depicted eagerly accepting advice from the all-knowing oracle. The art of literature itself has dwindled in importance during the life of the Joyce Carol Oates career, but she herself has done fine, which is all that matters for the ambitious scribes. Find new literary territory? Write in a new way? Cannot be contemplated. Too risky. Pay your money and learn from the Voice of Authority. Of the status quo. Princeton professor. The same-old same-old.
****

On the other  hand, I and my partner in this project and in life, Kathleen Marie Crane, are seeking new territory. Our tactics include speeding up the art. Speed and immediacy are our object. Instant connection with the reader– as fast as punchy as a punk rock song. We know people will dismiss our experiments. The early products won’t look like anything that would be taught in a “master class.” We proceed regardless– because change is what art is and has always been about.
*******